Composing is much more of a community process in the 21st century and blogs have become a rhizomatic structure that challenges the linear traditions of writing. Margaret C. Hagood (2004) explains that such rhizomatic cartography is “of coming and going, of offshoots and new directions. By definition, rhizomes constantly shift and change, growing simultaneously in all directions. Thus, the rhizome maps illustrate the ever-changing multiplicities involved in adolescents’ uses of popular culture where tensions arise between identity and subjectivity in adolescents’ text use” (p.145).

First, the use of web logs is free and there’s access to publication for anyone who wishes to compose in a space online. Second, the ability to link any site to another site creates community. As a teacher, I think about the possibilities this allows for students and teachers in new and exciting ways. There are endless projects that might be assigned and created using a 21st Century style and there are multiple projects that might be assigned and created with students in digital age. Over a period of time, they can build on their ideas, rethink their writing, edit, re-compose, re-link, and re-discover their thoughts as they visually and textually think about the world that matters to them.  Cyberspace transcends the classroom in a global network of real-world audiences and teaching writing is no longer contained and constrained (Baetens, 2002) in traditional ways. Instead, blogging opens opportunities for interconnected communication.

In 2007, I became intrigued by the use of Blogs as a place to exist beyond paper and traditional writing genres. I set a goal for 2007 – 2008 to blog a little, everyday, about happiness.  The result, The Lilypad Chronicles was a first attempt of using cyberspace as an outlet for journaling, creating and thinking. It was here that I learned Blogs are rhizomatic.  Whereas traditional academic texts link ideas through references and bibliographies, blogs link ideas through links and hypertext.  This results in a network of thought that moves in the fashion of rhizomes and the branching forth of connected ideas of Edward Soja’s spatial theory). 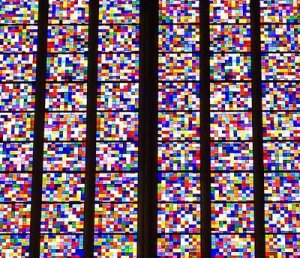 That year, I also began to think of the web as a place to store my notes. First, while working on a project about technology in the 21st Century, I created a space called Bloggity Blog Blog where I could store my ongoing notes about technological literacies.  With this success, I began to ponder about what it would look like if I found the way to get a video project online that I did for one of my university classes.  The assignment was to think about higher education from materials we read in class and we were encouraged to be creative. I chose to write a digital poem and used t.s. eliot’s “The Wasteland” as a point of departure.  The Graceland is my video poem from that project.  (Since then, I’ve added some of my other poetry on two sites:  Poetic Doodles I and Poetic Doodles II (my acrostics).

Since then, I took classes that also changed my way of thinking about writing in the 21st Century.  Visual Literacies with Kathie Maniaci and Arts Based Research Methodology with Dr. James Rolling brought to my verbal interests a way to blend my love for a visual world.  From both, I started a project called, “What Does Visual Literacy Sound Like” with a goal to create a podcast. I wanted my Visual project to be sonic, but I failed.  I learned I couldn’t do this without visual images (although I have listened to the project and it works in a sonar way, too).

My 2009 Blog nods towards my ten years of teaching experience at the J. Graham Brown School in Louisville, Kentucky.  The school was a lot of things to a variety of people and this often resulted in a quirky population of students.  QUIRKY is my year-long dedication of reminding myself that a quirky world is a good world.  It is a follow-up to The Lilypad Chronicles.

In 2010, my rhizomatic blogging revolves around KARMA and it is my daily journal. Continuing with the tradition of writing online, this year has focused entirely on kismet.